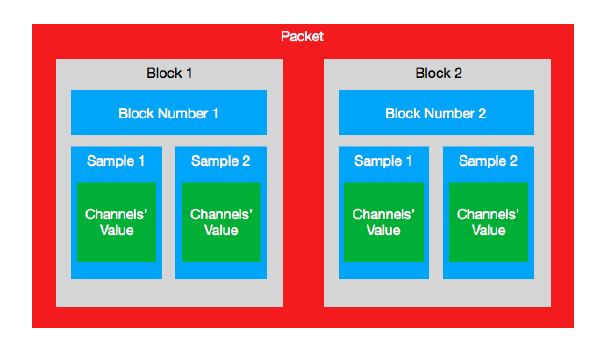 This class handles the communication between the server/device and the client. It should be included with both - NatusDataServer and NatusClient Class. The class performs the following functions -constructing TCP and UDP packets, calculating the CRC of a packet and checking the CRC on the receiving side, sending the packets over TCP/UDP port, receiving packets over TCP/UDP Port, reconstructing the data from the packets and listening for connections on device/server-side. Note - The file limits the maximum number of channels for a device (stored in MAX_NUM_CHANNELS in NatusPackageInterface.h) to 100.
The format of the packets constructed along with each field size is as follows:

The commands through which the NatusDataServer and NatusClient communicate are as follows:

CMD_Ping
To check if the connection is successful and data can be sent and received.

CMD_GetInformation
To send the device information such as the number of channels and sampling rate to the client application.

CMD_SelectChannels
To send data only for the channels numbers mentioned in the payload. It corresponds to the SourceChList parameter.

CMD_SetBlockSize
To set the number of blocks to send per packet. It corresponds to the SeverBlockSize parameter.

CMD_GetDecimationFactor
To get the current decimation factor of the device/server.

CMD_ERR
The command is sent if there is any type of error.

Note: The packet format for this command is as follows:

CMD_StreamPackage
The command is sent from the server/device to the client application when only 1 block per packet is sent.

CMD_VariableSizeStreamPackage
The command is sent from the server/device to the client application when more than 1 block per packet is sent.

This class handles the server-side processing. It performs the following functions - starts-up the TCP and UDP server, check for new connections, gracefully disconnects from the client, registers various callbacks on client connection and deregister the callbacks when the client disconnects and responds to the commands (described in the NatusPackageInterface section) from the client via TCP protocol. 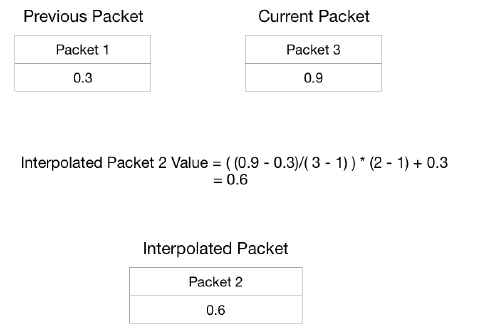