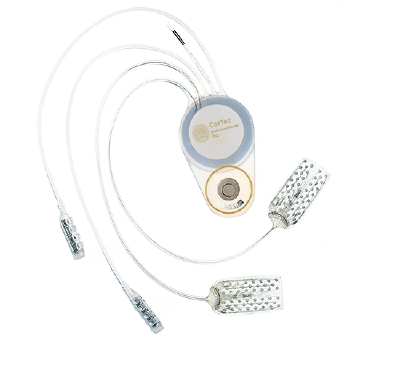 CortecADC is a source module that allows for inter-cranial recording and stimulating over 32 channels via a fully implantable device. It is intended for long-term measurement of neural activity and electrical stimulation of brain tissue. See the CorTec site for more information.

The total number of digitized and stored channels. In the current implementation, this parameter cannot be edited, and will default to how many channels are available from the implant.

Samples per channel per digitized block. Together with the sampling rate, this parameter determines how often per second data are collected, processed, and feedback is updated. For example, at 1000 Hz sampling and a SampleBlockSize of 20, the system (e.g., source signal display, signal processing, and stimulus presentation) will be updated 50 times per second.

The sample rate of the system. This parameter cannot be edited, and will default to the sampling rate available from the implant. In case you are experiencing problems by higher sampling rates (e.g., data loss, jerky display, etc.), increase the SampleBlockSize so that you are updating the system less frequently (usually, updating the system 20-30 times per second is sufficient for most applications), and increase Visualize->VisualizeSourceDecimation. This parameter will decrease the number of samples per second that are actually drawn in the Source display.

Offset for each channel.

Gain for each channel.

Names of each channel.

These parameters can be found in the "Stimulation" tab of the BCI2000 config window.

This parameter defines the shape of the charge balanced stimulation pulses, as described in Fig 1. The pulses are defined in one column of this parameter matrix, and it is possible to define an arbitrary number of pulses, each of which are associated with a user defined integer called a PulseID. The rows are labeled and there are some limitations to the magnitudes and durations which are elaborated on in the subsequent section. 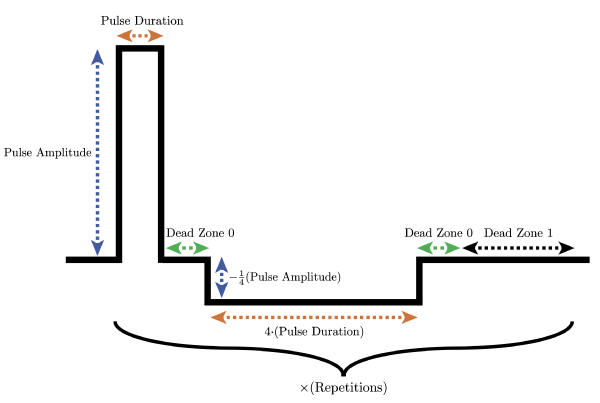 This must be an integer greater than or equal to zero. This ID will be used in the StimulationTriggers parameter.

The valid values of this parameter are in the range 0 to 6120 µA. The granularity changes for smaller amplitudes as follows:

The pulse duration defines the duration of the main pulse in µs. The counter pulse will have a duration that is four times longer than the main pulse duration. Pulse duration values are set in steps of 10 µs. The acceptable range is between 10 and 2550 µs. Again, if the provided value is not a multiple of 10, it will be rounded to the nearest valid value, and other parameters will be modified to maintain charge balance.

Holds the duration of the pause between main and counter pulse in µs. Values can be set in steps of 10 µs. The acceptable range is between 10 and 2550 µs. The same duration dead zone will also occur after the counter pulse.

This parameter defines when stimulation is applied, what pulse is used, how many pulses are applied, and the source and destination locations of the stimulation. These parameters are defined in the rows of this matrix with labels

This must be a BCI2000 expression. When this expression evaluates true during the run, the stimulation is applied.

The second row should contain a valid PulseID that is to be used.

The third row is an embedded list that defines the source electrodes.

The fourth row is also an embedded list that defines the destination electrodes.

The fifth row defines how many times that pulse is repeated. The max is 255.

This parameter cannot be edited and is automatically populated with information returned from the device, such as device type, device ID, and the firmware version.

This parameter cannot be edited and is automatically populated with information regarding state units and their multiplier. The device provides information such as humidity, temperature, control value, etc., which are recorded in BCI2000 states (see state information on this page for a complete enumeration of states). The device provides these values with floats, but BCI2000 states can only be integers. The multipliers defined in this parameter are used to increase the amount of precision in the state values. To approximately recover the original float values with the units defined in this parameter, divide each state by its corresponding multiplier.

The states encode auxiliary information returned from the Cortec implant. The device provides this data in floating point numbers, however BCI2000 can only record integers to it's states. To maintain some precision, these floats are multiplied by constants, then recorded to the states as integers. To approximately recover the original data, divide the state by its corresponding constant. Constants are shown in the following table.

The communication protocol the device uses does not re-send lost data. This state annotates what samples were lost in the bio-signal data. Currently, lost samples are made up by duplicating the previous sample.

16 bit state that changes when new supply voltage value is received from the implant. After dividing the integer state value by the the voltage multiplier defined in the StateInfo parameter, the units are in volts.

16 bit state that changes when new humidity value is received from the implant. Units in %rh.

16 bit state that changes when new current control value is received from the external unit. The power of the implant is controlled by the external unit. The control value provides a measure of how good the coupling between the two coils is and how much more power can be provided if necessary. The value is between 0.0 and 100.0 percent, where 0.0 translates to no power and 100.0 translates to maximum power applied.

16 bit state that changes when new temperature value is received from the implant. Units are degrees Celsius.

Binary state that changes when the device reports that it is stimulating.

Binary state that records when a stimulation trigger expression evaluates true. State remains true for the duration triggered stimulation. This is useful for determining the latency between when stimulation is requested and when it is actually applied. This is done by computing the difference in time between the rising edges of ImplantStimulation and RequestedStimulation states.