Difference between revisions of "User Tutorial:Obtaining Mu Rhythm Parameters in an Initial Session"

Although the basic properties of the Mu rhythm are identical for all humans, spatial patterns and exact frequencies are different across people. Thus, it is necessary to obtain these individual parameters prior to any feedback experiments, i.e., to calibrate the BCI system using data acquired from an initial session.

In this initial session, the subject is instructed to incorporate hand and/or foot movements in response to visual cues. To identify a subject's Mu Rhythm, offline analyses then determine the frequency and location whose activity changes the most across conditions (e.g., hand movement and rest). These analyses result in spectra calculated at different locations or in topographical plots at particular frequencies. For the purpose of conceptual demonstration, the tutorial will mainly focus on one dimension control (up and down of a cursor) using hand movements. Once familiarized, one can then engage foot movements for more tasks.

Preparing for the Initial (Screening) Session

To begin, you first need to gather some system data. This tutorial will assume that you will be using a dual-monitor setup as shown below, with the experimenter of the sessions operating on monitor 1, and the subject will be watching monitor 2.

Open Display Properties by right-clicking on an empty portion of the desktop and clicking Properties, and navigating to the Settings tab.

Connect your amplifier to the computer, and turn it on.

If your amplifier is from the gUSBamp family, drivers can be downloaded from official website of gtec. In this example we are using a gUSBamp-8 amplifier.

If your amplifier is from the gMOBIlab family, you will need to make a note of the port it is connected to. In order to determine that port, in Windows XP, go to the Windows Start Menu, and choose Start → Control Panel → System → Hardware → Device Manager → Ports (COM & LPT). Different versions of Windows may have the Device Manager in a different location.

You can now close all open windows. 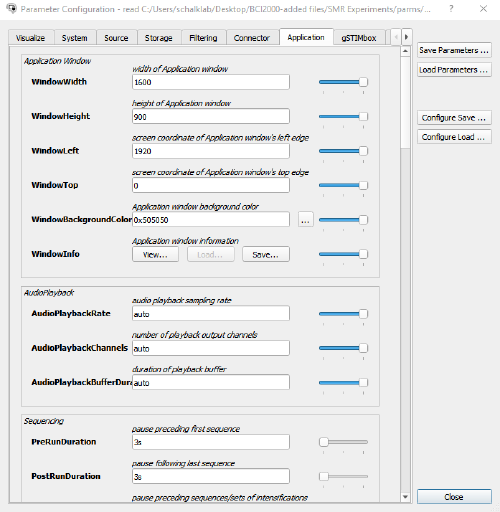 In the Source tab, set:

In the Application tab, set: 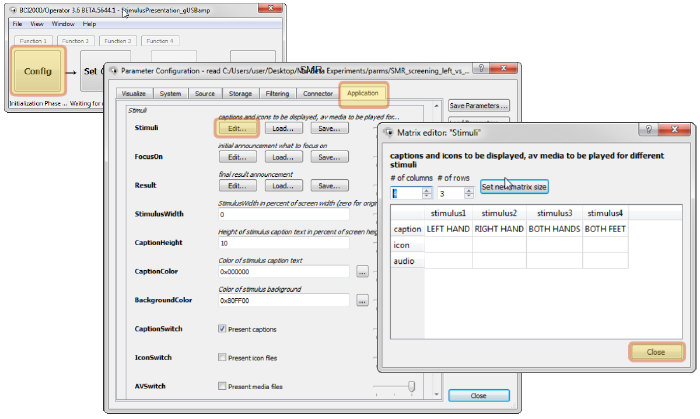 Instructions to the Subject

During the initial session, the subject's screen will either be blank, or displaying a command of left or right.

For future sessions with hands and feet involved,the subject's screen will either be blank, or displaying an arrow pointing up, down, left, or right.

To start an experimental run, click Run in the operator window. Each run takes five minutes and gathers 25 data points, or "trials", that differentiate between moving the left hand and the right hand. Ideally, there should be 100 trials, meaning that four runs are suggested. This is done as four separate runs instead of one to allow the subject a chance between each run to rest, blink, swallow, speak, or have some water if so desired. 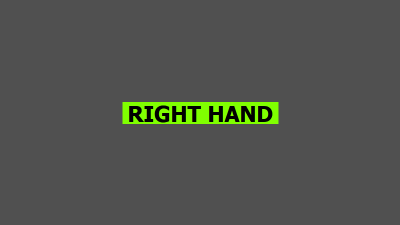 Once all data have been collected, the Analyzing the Initial Mu Rhythm Session page shows you how to analyze data from the initial session in order to determine parameters for online feedback.