The ComplexVisualizationDemo signal processing module demonstrates how to send a large number of visualizations with arbitrary pixel content to the operator module. Two rendering methods are provided: Native Qt QPainter-based rendering, and BCI2000's own GraphDisplay based rendering.

values) between its input channels. Determination coefficients are visualized in form of pie charts, and pie charts are sent to the operator module as bitmap visualization data.

Operator visualization windows have no frames or title bars, and are arranged in form of a lower triangular matrix, with each window appearing at the place of its associated correlation matrix element: 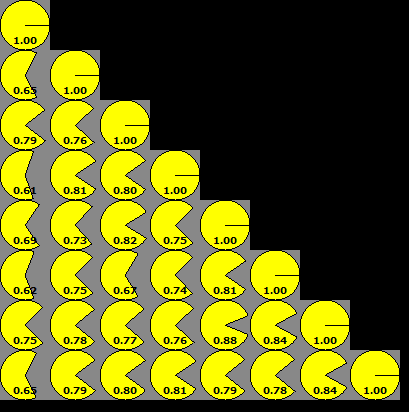 The code presented here is using the BCI2000 GraphDisplay class.

GraphDisplay is a layer of abstraction that allows to render shapes and text objects into a normalized coordinate system. Code that uses GraphDisplay is most likely to survive breaking changes in the drawing backend (currently Qt) and BCI2000 dependencies.

In contrast, QPainter-based rendering provides access to more complex drawing functions but suffers from a limitation in Qt which makes text rendering impossible outside the main GUI thread.

In the ComplexVisualizationDemo source code, QPainter-based rendering is available through a compiler switch.

A positive integer that indicates how often images are refreshed. 1 means every refresh on every signal packet.

The maximum number of visualization windows created, or 0 for any number of windows.