Difference between revisions of "Contributions:ParallelPortFilter"

This simple filter extension resides in the Application module and makes input and output with the parallel port easy. The inputs are stored as states ParallelPortInput1 - ParallelPortInput24 based off the number of ports connected. For more information, see States.

Compile the extension into your source module by enabling contributed extensions in your CMake configuration. You can do this by going into your root build folder and deleting CMakeCache.txt and re-running the project batch file, or by running cmake -i and enabling BUILD_PARALLELPORTFILTER. Once the extension is built into the source module, it can be used.

If using the filter, SourcePorts must have a number greater than 0. Then list the names for the ports separated by spaces in SourcePortsList. The list must be the same length as the value in SourcePorts. You can then set the LPTMapping with column one in using the names as in SourcePortsList and column 2 using the corresponding hardware address. This step is optional. If not configured, LPT1 maps to 0x378 and LPT2 maps to 0x278 which should work for most users. DigitalOutputEx is only necessary if user wants to write output through the parallel port.

If the default settings for LPTMapping did not produce results, the hardware address might be different for the user's computer. To find the hardware address for the parallel ports for your machine, press WIN + R and enter devmgmt.msc. In Device Manager, expand the section labeled Ports (Com & LPT). If this section does not exist, you probably do not have LPT ports or the driver is not installed properly. Find the one labeled with (LPT1) or whatever port you are looking for. Right click and select Properties. In the Resources tab, there is a field called I/O Range and take the first value of the range which is in hexadecimal. If multiple I/O Range, read the first one; if that does not work, try the other one. Take that value as the hardware address for Parameter LPTMapping. These instructions for finding the address has been tested on Windows XP, 7, and 8. 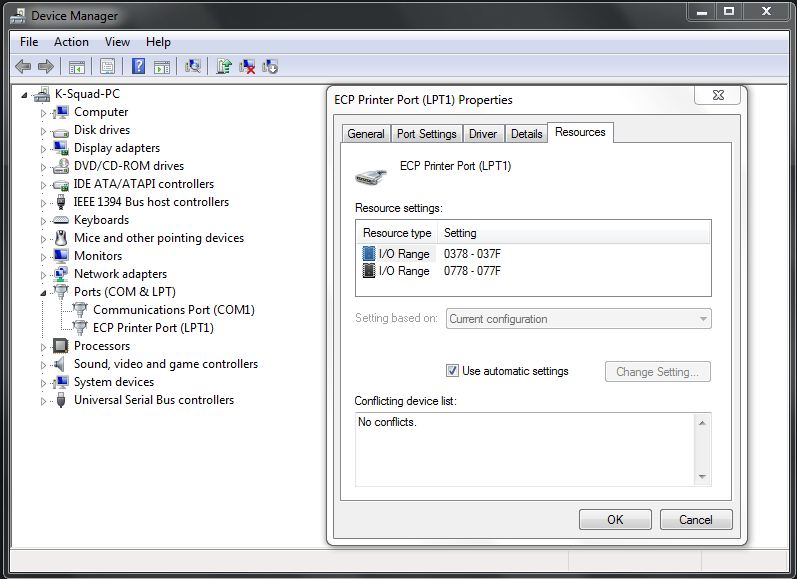 For better explanation of the parameters, see Parameters.

This parameter is used to initialize the filter and to keep track of the number of ports being used. This number should be the total number of parallel ports that should be used to communicate. It should be an integer value greater than 0 if being used else 0. Most computers do not have more than 3 parallel ports but some have 4. In good practice this value should not be greater than 3 unless you are sure you have that many ports.

This parameter lists the ports to be used and the order to communicate through them. It should be a list of the port names LPT1 - LPT3. You can not use the same port twice in on list. This list must be the same length as the value in Parameter SourcePorts.

This parameter is to manually enter the hardware address of the ports incase that the computer being used does not conform to general use hardware addresses. Column one should have the names of the ports such as LPT1 or LPT2, same as the values in Parameter SourcePortsList, and column two should have the hexadecimal value of the port such as 0x378. The number of rows in the matrix should be equal to the value in Parameter SourcePorts, while it must have two columns if being used, no more, no less.

This matrix of expressions that controls the outputs on the parallel ports. Each port has 8 bits which correspond to 8 rows on the matrix. If the expression evaluates to True, the bit will be set to 1 else to 0. Boolean expression work quite well here. For more information on digital output and expressions usage for ParallelPortFilter see Digital Output.

Each port has 8 bits that can be written to. These bits can be accessed through the Parameter DigitalOutputEx. The user must write expressions for each individual bit on each port. The row label corresponds to which bit it will be written to. If multiple ports are enabled, row 1 - 8 correspond to the bits 1 - 8 on the first port and row 9 - 16 correspond to the bits 1 - 8 on the second port and so on. Expressions that evaluate to True set the corresponding bit to 1 and those that evaluate to False set the corresponding bit to 0.

In the case that the user wishes to send an signal or a value through the port, the user must convert the number into binary and write the corresponding zeroes and ones to the respective bits. To do that, the formula:

The x is the signal the user wishes to send through the port. For example if the State MousePosX was to be sent through the port, the Parameter DigitalOutputEx would be: 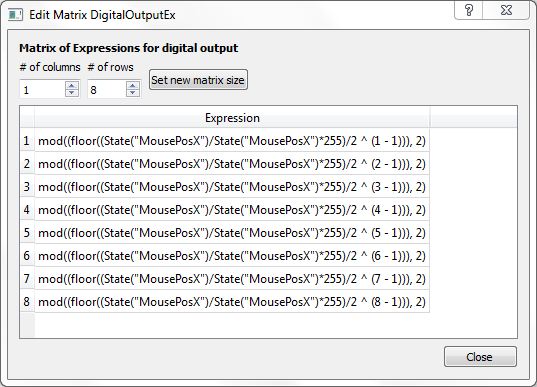 Not all rows have to be created. Any row not named just writes the bit as 0. The rows also can be written in whatever order if you just change the row label in the parameter. The example below just sets bit 1 and 5 to 1. All other rows are zeroes. 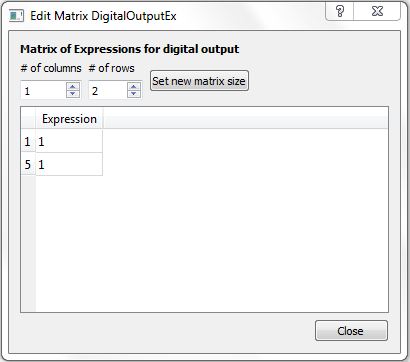 For more on expressions, see Expressions.

This example enables port LPT1 with a new hardware address.

This example enables ports with names MRIScanner and StimulusDevice with hardware addresses. Note that the address for the ports are the same as the default values for LPT1 and LPT2. This shows that LPT names can be renamed in the Parameter Configuration to make it easier to read. This does not change the names of the addresses given by the computer itself.