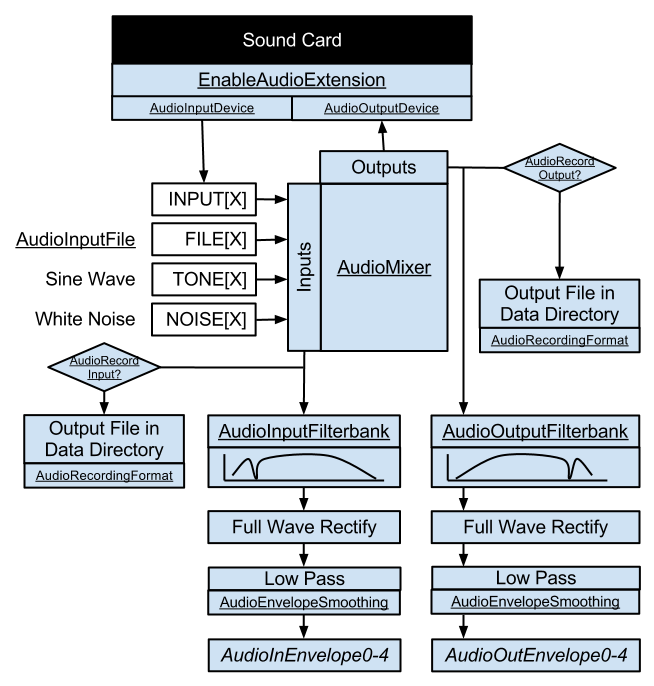 The eyetracker is configured in the Source tab within the EyetrackerLogger section. The configurable parameters are:

Note: GazeScale and GazeOffset are quick hacks to address an issue with gaze data being clamped around the edges of the screen. The eyetracker gives back values which are between 0.0 and 1.0 for onscreen gaze but supports looking slightly offscreen by allowing gaze data returned to go above 1.0 and below 0.0. BCI2000 needs this scaled between 0.0 and 1.0 before the gaze data is multiplied by 65535 for storage in the 16 bit state. These two parameters account for this scaling and offset and prevents the clamping from happening as often as it would otherwise. These parameters will be removed once BCI2000 supports typed states.

The following code retreives the actual ~(0.0-1.0) range that the eyetracker outputs directly (assuming you've scaled and offset the signal to avoid clipping) from each eye and averages it to find a gaze position.

Unless otherwise specified, all states are prefixed with Eyetracker<Left/Right>Eye which corresponds with each individual eye. The EyetrackerLogger extension does not support subjects with more than two eyes at the moment.

The eye gaze position (where - on the screen - the subject is looking) is returned from the Tobii SDK as 32 bit floating point numbers which (roughly) range from 0.0 to 1.0. They are multiplied by 65535 and stored as 16 bit integers in these states if the LogGazeData parameter is enabled. (0,0) corresponds to the top left of the screen, (65535,65535) corresponds to the right bottom of the screen. -- See EyetrackerStatesOK.

The pupil size in mm is saved in this state if LogPupilSize is enabled. It corresponds to the length of the longest chord drawn from one side of the pupil to the other. The size will change depending on the eye position and distance from the screen. Although it is given in mm, it would be best to use this as a relative measurement.

The distance between the screen and the eyes in mm is saved in this state if LogEyeDist is enabled. This measurement is an approximation. The actual measurement will depend on whether or not the test subject is wearing glasses or not.

This state is a number from 0 to 4 and is documented in the Tobii SDK manual. It is repeated here for convenience.

It'd probably be wise to remove all data points with a validity state of 2 or higher while running your analysis.

Early versions of the extension didn't take into account that the library may return a number greater than 1.0 or less than 0.0. This resulted in "pac-man" style wrap around of gaze coordinates in 2.0 and crashes in 3.0. If the output from the library is out of bounds, it is clamped to the boundaries and the "EyetrackerStatesOK" parameter is changed. A value of "1" corresponds to valid gaze data, a value of "0" corresponds to invalid "clamped" gaze data. Use the "GazeOffset" and "GazeScale" parameters to avoid clamping. Those parameters scale and offset the data so that when it does go out of range, it can still be fit into the 16 bit state.